Chlorine dioxide is used for closed disinfection of greenhouses, which can effectively kill bacteria, viruses and bacterial spores. Foliar spraying has a strong therapeutic effect on fruit mold, yellow mold, Alternaria, Aspergillus, brown spot, piercing disease, leaf shrinkage, etc. of vegetables. Irrigation with water is used for soil disinfection, which can prevent and treat vegetable root rot, etc., and there is no residual toxic substances. The Tianjin Institute of Agricultural Resources and Environment conducted experiments on cucumbers and celery that were more than 10 years old in sheds from 2005 to 2006. The results showed that with 50-100 mg/kg chlorine dioxide solution, the diseased seedling rate of cucumbers was 14%-19 %, 39%-43% lower than the clear water control, comparable to the efficacy of thiophanate-methyl and Chongjunqing, and 13.5%-15.8% higher than the clear water control. The yield is about 5% higher than that of the other two agents. The celery test showed that with 100-150 mg/kg chlorine dioxide solution, the incidence rate was 8%, the clear water control was 30%, the seedling deficiency rate was 0, and the control was 16%. The incidence rate of chlorine dioxide treatment The rate of seedling deficiency and seedling deficiency was 73.3% and 100% lower than that of the clear water control, respectively. Compared with the control, the chlorine dioxide treatment increased the yield by 14.4%-19.2%, and the difference was very significant. 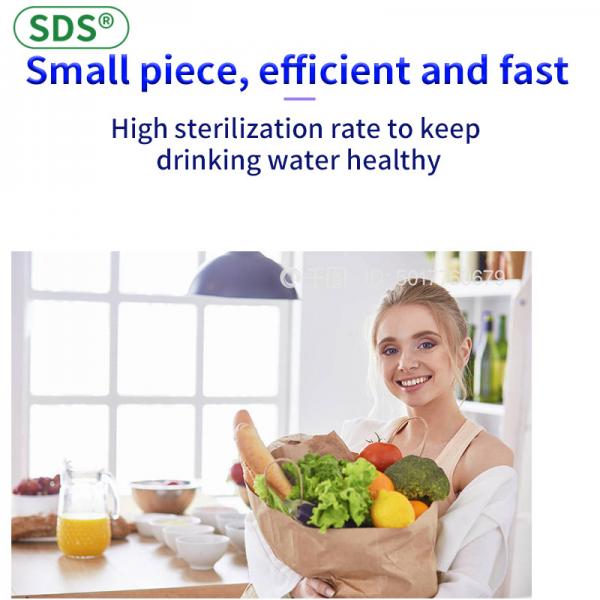 To keep tomatoes fresh, it is necessary to first prevent the occurrence of spoilage bacteria in water; secondly, to prevent enzyme oxidation; then to inhibit water emission; finally, to control amino acid oxidation in the fruit. Therefore, stabilized chlorine dioxide should be selected that can generate chlorine dioxide gas concentration up to .10000ppm, and the gas generation capacity is maintained at a moderate level, which can be used for about one month. For use, place a 5-gram non-woven pouch of the preparation in the lid of the corrugated carton containing 20 kg of tomatoes. As a result, the occurrence of bacteria is prevented, ethylene gas is suppressed, and thus fermentation and aging are prevented.

Quality 2%. In addition, it also contains pectin and polysaccharides. When the cucumber encounters a gas barrier and the carbon dioxide reaches more than 100%, the tissue is broken. Even at low temperature, it is easy to emit water violently, and it is easy to suffer from low temperature damage and tissue damage at 7 °C. It can be seen that the preservation of cucumbers must first inhibit the emission of water, and then inhibit the occurrence of ethylene gas, and must also prevent the activities of water-system spoilage bacteria. In order to meet these requirements, the gas concentration is 10000ppm, the overall gas production capacity is strong in the initial stage and slightly weak in the later stage, and the average level of stable chlorine dioxide is used as the preservative. Lasts about a month. The specific preservation method is the same as that of tomatoes.

Leeks are fragile at low temperatures and are extremely sensitive to temperature changes. Frostbite occurs in tissues below 5 ℃, and the respiration is intensified. Therefore, the most important thing when preserving freshness is to inhibit the emission of water; the second is to control the production of excessive gas; and then the production of ethylene is inhibited. Finally, water system spoilage bacteria need to be prevented.

The fresh-keeping test used four domestic leeks in Japan, and the combination of nitrogen-filling, pre-cooling and stabilizing chlorine dioxide was used to compare the effects. After 18 days of testing, the result is that the commercial value of leeks filled with nitrogen and pre-cooled for freshness has dropped to zero, especially the leaf tips are scorched and the roots are melted. Fresh-keeping with stabilized chlorine dioxide still maintains the complete commercial value, no scorch at the tip of the leaf, and no melting of the root. Especially for soft vegetables, it is necessary to take fresh-keeping methods to prevent water loss and ensure that the leaves and roots are intact.

Guangzhou SDS Bio-Tech Co.,LTD,Founded in 2005,With its R&D production bases located in Guangzhou Science City of Guangdong Advanced Bio-Tech Demonstration Zone,SDS now own leading GMP workshops producing disinfection products in South China,Is one of the most important manufacturing and R&D base in Chlorine Dioxide in China.

It is an high-tech corporation belonging to The Guangdong. Through undertaking National and Provincial Level Food safety projects it has won three Guangdong Provincial level Awards, and has been awarded 7 National patents.In recent years it has been actively participating in the formulation of National and hygiene standards for food and water.

SDS has always been devoted to disinfection safety and controlling the velopment, production and management of products. At the present it produces disinfection products on a large scale, consisting of two large ranges, which amount to nearly 50 varieties of product, including:Chlorine dioxide and potassium hydrogen persulfate; covering industrial disinfectants, civil disinfectants, hospital disinfectants, etc.All of which are largely used in China, Hong Kong, Thailand, Singapore, India, Indonesia, United States, Philippines, Vietnam as well as other countries. After decates years of development, SDS has already become top 3 manufacturer of disinfection products in China.

Send your message to this supplier
You May Like
Find Similar Products By Category:
Pharmaceuticals
Hot Searches:
Inquiry Cart 0
Contact Us
Inquiry Cart
Back To Top