Headcover hydraulic press's empty and return journey can be high-speed, and the speed of operation journey can be adjusted according to the need. When switching from operation journey to return journey actively, it can be controlled by stroke orientation or hydraulic press effect force, and it can also be switched after a predetermined effect force is applied. Operating forms include active stroke, single stroke and inch movement. The hydraulic press can be equipped with blank initiative feeding, workpiece initiative transmission between workstations and forging initiative unloading organization. The number of ejectors in the worktable can be regarded as single or multiple units to equip. Filling valves are used in large and medium-sized hydraulic presses. The cylinders of these equipments are large and only supplied by oil pumps. The downward speed is too slow, which affects the output power. An upper tank is set on the top of the press. A filling valve is installed between the upper tank and the upper chamber of the cylinder. When the piston is lowered, the filling valve opens and the oil of the upper tank is directly filled into the upper chamber of the cylinder. When pressurized, the filling valve closes and is pressurized by the oil pump. . When the piston rises, the filling valve opens and the oil in the upper chamber of the cylinder returns to the upper tank.

The filling valve of headcover hydraulic press can also set pre-open pressure and has reliable sealing function. It is widely used in forging and pressing machinery of hydraulic press. It can make the cylinder of hydraulic press play the effect of rapid filling and discharging oil. At high pressure and large flow rate, it can play the effect of unloading and avoid unloading impact. Filling liquid is usually used as suction and discharging valve between hydraulic pressure and oil tank, and it is a rapid postponement of large press. When it comes to time, the cylinder needs a lot of oil to make up for it, so it is advisable to absorb oil from the tank; when slowly entering pressure, it is necessary to avoid the oil from the reverse of the cylinder to the tank; when reversing, the oil can be discharged back from the cylinder to the tank. Processing is exquisite, fine height, no leakage, excellent pressure-holding function, itself to slow down the spool, can effectively reduce the sound and vibration. It is widely used in high-speed punch, press, injection machine and other machines. 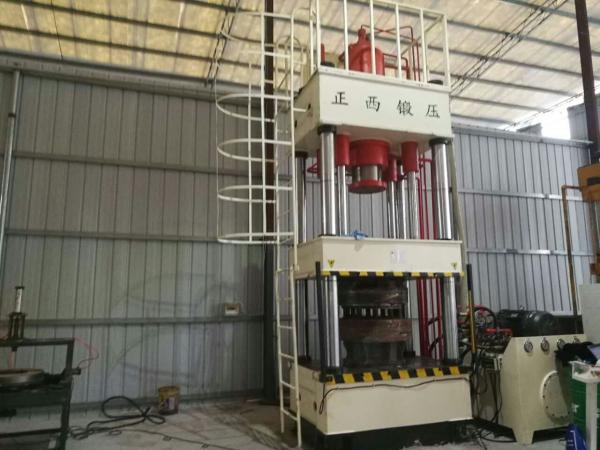 Chengdu Zhengxi Hydraulic Equipment Manufacturing Co., Ltd. was founded in 2009 with a registered capital of 30 million yuan. It is a company integrating research, design, manufacture and sales of hydraulic equipment. The company is located in the "land of abundance" "the hometown of panda" Chengdu. The factory covers an area of about 75 acres. It has always been known for producing high-precision, high-quality hydraulic presses, and has established a good reputation and credit in the domestic and foreign industries. The factory has more than 70 sets of finishing equipment, including Japan's Mitsubishi floor-standing composite boring machine, imported heavy-duty lathes, large vertical vehicles and other processing equipment. Ultrasonic flaw detector, hardness tester, spectrometer imported dynamic balance machine and other testing equipment, to ensure that every process in the production process is improved. The main product series include: 100-16000 tons of molding presses; 100-20000 tons of metal drawing (stamping) forming hydraulic presses. Products are widely used in automotive, aerospace, high-speed rail, shipbuilding, power, bathroom and other industries, providing key equipment and advanced technical support for a number of important industries.

ZHENGXI Hydraulic is an ISO, SGS and CE certified company. In the process of development, we have been attaching great importance to developing and cultivating talents. Thus, we enjoy a number of professional and skilled talents who are committed to innovation and improvement. We are proud of high manufacturing capacity, good ability to design and develop, rich experience in quality control management as well as high competitiveness and all time pursuit of offering cost-effective and quality assured presses.
ZHENGXI Hydraulic has been conforming to the latest trend of technology development. Sincere and credible attitude, flexible business strategy, high quality products and perfect service are rendered to all our home and abroad customers. We assure you a worthwhile cooperation with us on your project. We sincerely looks forward to your visit and guidance and long-terms cooperation with your esteemed company in the near future.
Send your message to this supplier
You May Like
Find Similar Products By Category:
Punching Machines
Hot Searches:
Inquiry Cart 0
Contact Us
Inquiry Cart
Back To Top